I decided one day in the supermarket I would take a photo of everything with American- or Texas-related marketing. Interestingly, you see almost as much Texas stuff as American stuff.
As you will see, it's the most unhealthy and tasteless looking stuff you can find that gets the American branding. Sadly, fitting.

Here's what I saw:

We start off with the American classic, the cheeseburger. This one is prepared, packaged and frozen for your convenience, with the American flag in the corner. And what American wouldn't go for a good ol' "gebratene Rinderfrikadelle mit Schmelkäse" aka Cheeseburger? 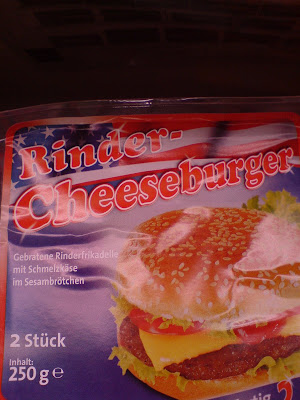 And of course if you have cheeseburgers you got to have hot dogs: 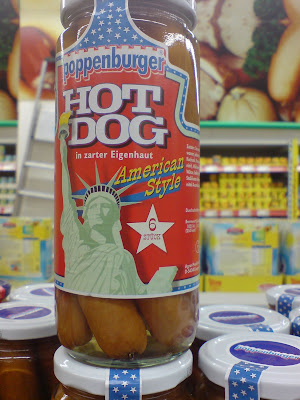 American Style, which I suppose means made with all the bad parts of the pig and not the good parts like much German sausage. Although it's not very American-style to put them in a glass jar and advertise that they're wrapped in their own soft skin. Notice the prominent Statue of Liberty. A theme repeated in the American Style Pizza Supreme: 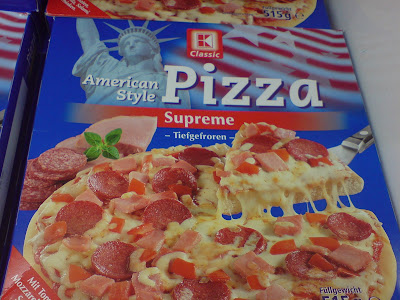 Also with American flag decoration. You can even more region-specific with a Texas big pizza, which appears to just be a spiced up pepperoni pizza. Although this combination brings up an interesting quirk of ordering pizza in Germany as an American. If you ask for 'pepperoni', you will get spicy pepper. If you want pepperoni, you would ask for 'salami'. Thus the peperoni-salami pizza below: 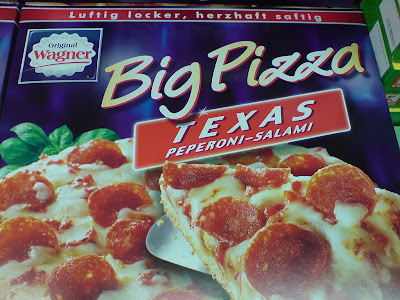 And then you have the Texas-Ribs. Already marinated and cooked and ready to go. 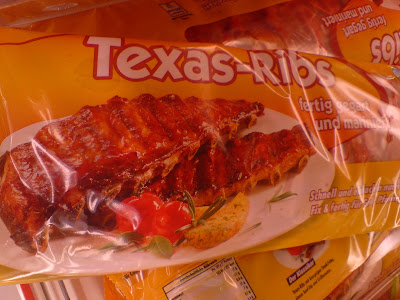 These don't actually say "American" or "Texas", but it's close: 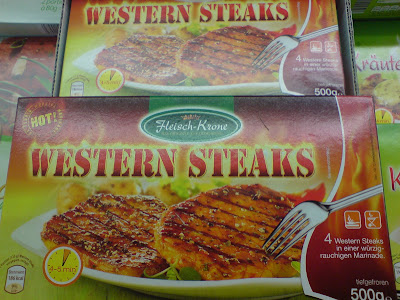 It's not just meat, too. Check out the "Old Century Bourbon Whiskey". 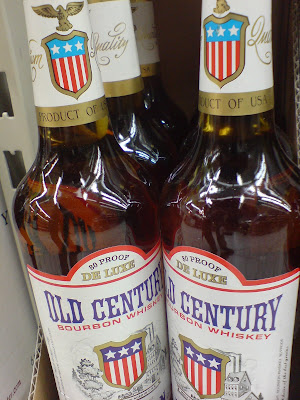 Notice that it is "De Luxe". I wonder how much of the 8 euros per bottle is just to cover importing it from the USA. This stuff just seems really scary.
These may look familiar: 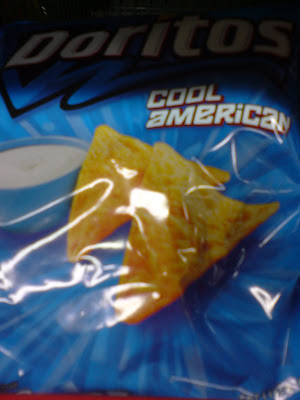 "Cool American" Doritos. Of course in the US we just call them "Cool Ranch". And I think when you're on a cool ranch you just call them "doritos."
And finally, I saved the best for last: 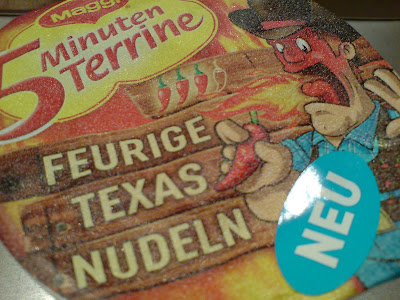 Feurige Texas Nudeln. It's like instant cup-o-soup. I actually had to buy this one. Surprisingly, it was actually spicy. Not real tasty. But it was spicy. Which is hard to find over here. Even when something says "fire-hot!" 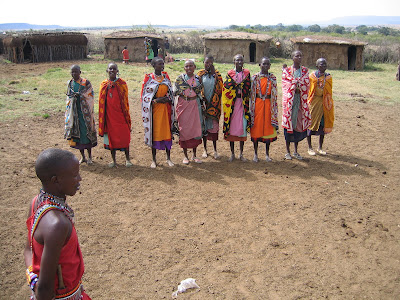 On the second day before we headed out in the morning the guides asked us if we wanted to take an opportunity to see a Masai village (the tribe of this region). They would show us around their village and their traditions, show us some sort of traditional dance, etc. etc., and it was going to cost us each 40 dollars, I think it was. Maybe it was 20. Anyway, my initial reaction was to skip it – especially with the 40 dollar price tag in the middle of the Masai Mara – it seemed like there’s no way it would be genuine but rather a rehearsed show and dance that would leave me feeling uncomfortable. But the other five in our group were happy to go through with this and so I went with the crowd. We arrived at the village and were greeted by a young group of the village men. Most of them could speak English to some extent, some much better than others. These guys were all very tall and all looked to be between 17 and 25 in age. 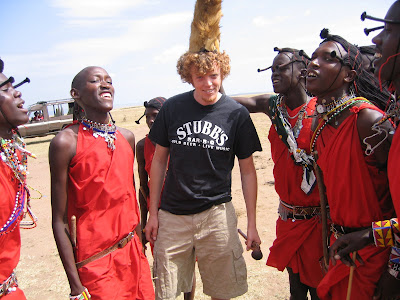 Except for one guy, who played kind of the part of tour leader among them, who looked unusually short and in his late 20s, but who was also the best English speaker and seemed to be in charge of the whole production. We later found out that he was the only one of the men not married, especially unusual given his age, and were given the impression he never would be. It wasn’t clear to me if this was because of his short stature which would make him relatively unattractive to the women in terms of the tribe traditions, or because perhaps he was gay. I’m thinking it may have been both.
So these guys did some singing and yelling and dancing for us – kind of what I had expected. And then proceeded to start what I’ve many times seen played out on TV and decided was one of my worst nightmares…
This is the part were the local tribe is doing their traditional dance and drags one of the white guys up in front of them to join in - simultaneously seeming to me to be making a mockery of their traditions and knowingly or unknowingly making a fool of the guys up there trying to dance (see George Bush on a number of occasions.) (Or maybe everybody’s trip to Hawaii that I’ve seen photos 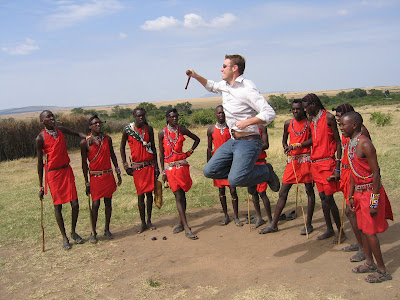 of.) You get the idea.
And so I was thrust into the middle of the Masai Mara warrior men to dance their traditional dance with them, trying my best to be a good sport and actually enjoy the experience, but in reality just thinking “this touristy crap is EXACTLY why I didn’t want to come out here and lose 40 dollars”. Anyway, all the guys in our little group were forced to eventually give it a shot. And at least I can come away saying I didn’t go through it sporting the most ferocious white man’s overbite that Mike was wearing (HA!) (see photo/click to enlarge) 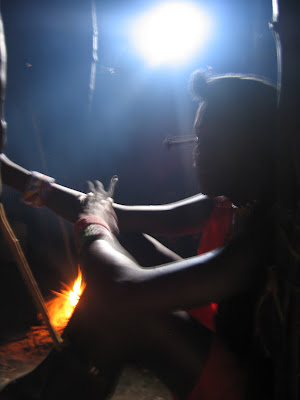 They then showed us how they traditionally make fire...and then tried to sell us the sticks and wood they used to do this. Next we split up and each went into one of the family huts and the father figure would explain some of daily life...which was really the only interesting part of the whole thing. These tiny little huts made of cow dung were so dark and cramped. And then they would build a fire inside of them so also full of smoke. I guess they were very cozy though.

At the end of the tour we were directed over where, immediately adjacent to the village, was an area of about the same size, but compromised completely of makeshift cow dung tables where tribe women were selling handcrafts. It was basically a Masai shopping mall for tourists. I couldn't imagine this was representative of Masai life, which we'd paid 40 dollars to learn about. I'm not even convinced anybody there made the majority of things they were selling.
And I couldn't figure out what they could be doing with all that money. This little tribe must have been taking in 1000 dollars a day if not more in peak season. They appeared to be living off the land with everything we saw. I assume they actually lived there. 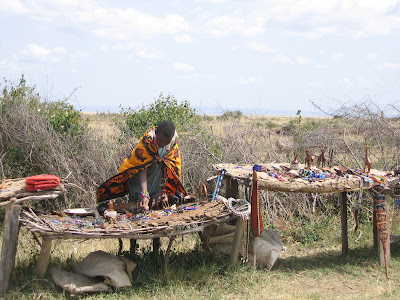 The rest of the day we spent finding more giraffes and elephants, hippos and crocodiles, ostriches and antelope.
The next morning we got up early and made the long journey back to Nairobi, and on the way we actually passed some real Masai villages, where the guides urged us not to take any photos.

We arrived back in Nairobi in the afternoon and Mike and I were able plan and buy tickets for the next leg of our trip, which we decided should be to fly straight to Zanzibar, as I didn’t have a lot of time to waste cruising by land over Kenya and Tanzania to get there. We found some dinner downtown near our hostel and got off the streets before it turned late.
Posted by Alex at 8:50 PM No comments: