I can't stop listening to this song. It's like my rally song now.
Even though I have no idea what the lyrics are saying. It just jams so hard. I could listen to the first minute over and over.

update:
Oh yeah, I did mean to give credit where it's due. Eric first told me about this band/song when we were having a little sitdown music sharing session. And Abi delivered me the album along with some other cool stuff. And my Quebecois friend Laurence confirmed that these guys are in fact "awesome".
true.
Posted by Alex at 3:19 PM 2 comments:

No time for blogging

Not that it takes all that long, but I guess I'm just not feeling creative enough, or I'm just too exhausted when I get home to deal with it. Been so busy lately, trying to make a final push with experiments and writing to get a paper out. It's going incredibly slow, even though I'm busting ass. Add to that I have a new student I'm responsible for and I've been totally neglecting her because I'm so busy. And then for some reason I decided to start a new German course that meets Monday through Thursday from 5pm-7:30pm. So I gotta leave work at like 4:45. Which means I'll have to start getting in before 8 to get ANYTHING done and probably will come back after class some days. And I'm also helping organize this big annual halloween party. And I also gotta deal with the stress of figuring out a halloween costume - and they don't exactly have the big costume shops here. And and and.
Posted by Alex at 10:32 PM No comments:

These are some of my favorite movies.
The Drosophila (fruit fly) embryo syncytial divisions. This is an embryo from a line expressing a green flourescent protein attached to the tubulin protein - so you can see microtubules and mitoses.
Here's a couple stills of an early developing embryo 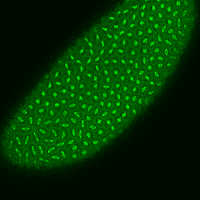 And then the movies....
They are all perfectly synchronized and are mesmerizing.


And another example with a different protein labeled:

Okay, I've been lazy about posting. So here is a dragged-out boring story. A while back I bought a Kit Kat Chunky Peanut Butter bar from the institute vending machine and to my surprise it was just a solid chocolate chunk. A week later I bought the same thing and the same thing happened again.

Check that out. just not right.

I called Nestle about the unfortunate situation only to be repeatedly directed to an answering machine that hung up on me. But even amidst the growing teasing of my work colleagues over the issue I was determined not to give up.
I wrote an email to Nestle complaining that I had twice given them my money to be given a big boring hunk of chocolate when my tastebuds were already waiting for peanut butter and crunchy goodness. I got an email back that said they were sorry, but they needed more info like the packaging writing. So I provided it. And then got a letter in the real mail apologizing.
But today I got a box, a BOX from Nestle. Filled with chocolatey booty ( but strangely no Kit Kat Chunky Peanut Butter). Anyway, who's clowning who about complaining about candy bars NOW? Maybe I'll give them the crappy Smarties.... 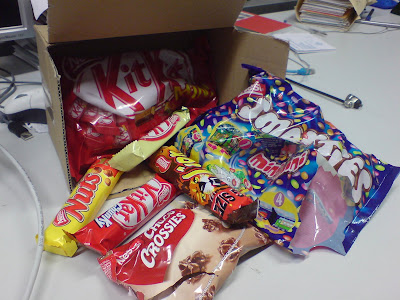 A mystery to me. I give you three examples. All three rocketed up the charts when they came out. All three are nothing any sane person would want to listen to more than once.

Grup Tekkan - Wo Bist Du Mein Sonnenlicht?
Number 12 in German Charts (April 2006)
These guys were serious when they made this, but it was so bad it was funny, and got some airplay, and then of course once it made it onto MTV all the kids got mixed up between what is bad and what is funny and what MTV tells them to like and then it just started going up the charts and this video was regularly played. Watching once is painful yet comic. But this thing was #12 in Germany.

Crazy Frog - Axel F
Number 3 in German charts, Number 1 in Europe charts (May 2005)
I think this frog got its start in ringtone commercials. And I guess people liked it so much that somebody just made it into a song. Well, just made the frog sing Axel F. And then a video. And BAM! Number 3 in Germany. WTF? I mean, WTF?


Schnappi, das Kleine Krokodil
Number 1 in German charts (Jan 2005)
Unquestionably the most creative of the three. but this is the intro to a children's cartoon. And it went to NUMBER ONE on the German pop charts. With the video regularly on MTV.
Another prime example of MTV telling people what they want to hear. And the masses listening. "hey, wait, this is actually pretty catchy! It's fun because it's for kids! I want to hear this more! it's cool!"

The Rude Pundit sizes up Blackwater perfectly in two sentences.

Just imagine: you tell some alcoholic pistol-fellating badass wannabes that they'll get paid a thou a day to drive around Baghdad in Hummers with submachine guns and not only do they not have to follow military code, they can't even be prosecuted for "misfires." Why, they might go batshit crazy with power. 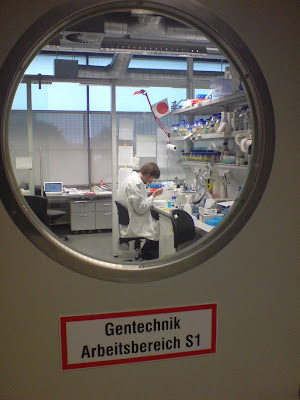 Today was "Dress Like a Scientist Day" here in the MPI-CBG. Also known as as genetic engineering inspection by the Saxon Ministry of Environment and Agriculture. We've been getting reminders and warnings for over a week now that today inspectors will be in the building to check that we are meeting safety regulations. So we've had a week to prepare - which means removing coke bottles from lab desks, taking empty beer cases out of cold rooms, buying lab coats so that we can actually wear them while the inspectors are here, closing and locking doors to "Gentechnik Arbeitsbereich S2" rooms that have been open since, well, the last inspection. The fun part is everybody is walking around all day in sterile white full-length lab coats and you feel like you are in the movies. It lasts a whole day. At about 6pm people started opening doors back up, bringing their snacks back to their desks, and removing their labcoats and hanging them back on their hooks, where they will sit until the next inspection (complete with one-week warning) comes around. That we are are told about these inspections in advance of course renders them pointless, and the fact that we ARE told about them must mean that the inspecting agency knows that the regulations are in fact a bit of overkill, and it's all just a big song and dance for the people who don't know how science is done to feel good about health safety and etcetera.
Posted by Alex at 8:05 PM 1 comment: