It's been about 6 months since Cliff and I took our journey to Krakow in the Trabi. After that adventure I managed to write a post about the car, but n 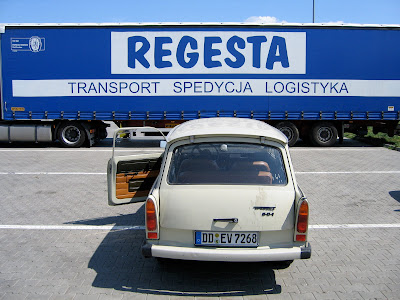 ot about going to Krakow. Now that last weekend I took it up to Berlin for the 20th anniversary of the fall of the wall, I figure it's a good time to talk about the Krakow trip. If you don't know about the Trabi, read the post linked above. One thing that was clear to Cliff and I after we got the Trabi was that it needed to be taken on a road trip. This idea was met with great bewilderment and skepticism by most. Their next comment was either "WHY would you want to take that thing on a long trip?" or "There's NO WAY that thing will make a trip like that." The answer to the first question is much the same as that to those that asked why we would even want to own/drive a Trabi at all: If you have to ask, it's not even worth trying to explain it to you.

Part of our motivation for the trip was just to silence all the haters. People seem to have forgotten that this was almost the only car that anybody owned here 25 years ago, and believe it or not, they did go on long vacations. And survived. And so it was that Cliff an I decided to take it for a weekend to Krakow, where neither of us had been before. It's about a 500km trip each way - doable in a day. bust just barely. You can't be in a rush with a Trabi. Gotta take it easy and enjoy the ride. Notice how we are passed as if standing still:


Aside from some bad traffic and construction, the trip there went pretty smoothly. We made it to Krakow before dark, which was about our goal. When you drive a Trabi around in Dresden, nobody really cares. There's a relative abundance of them here. Chances are if you drive around for 15 minutes in Dresden, you will see one. This is not the case elsewhere. like Poland. People were freaking out a bit when they would see us. Wherever we stopped, cameras came out. Cars would even pass us on the highway with their cameras snapping away. I guess it IS pretty rare to see one out on the highway or autobahn. After all, WHY would anybody take one of these things on a long trip?

When we got to the hostel we asked the guy there where would could park our car that would be relatively safe. He called up a pay lot around the corner and told them we were coming. He asked us what we were driving and when we replied "A beige Trabi" he got pretty excited in a very Eastern European accent exclaimed, "AHHHH!! A TRABANT!!" respect. By the way, this was maybe the best hostel I've ever stayed at, so check it out if you're in Krakow: Mundo Hostel very chill, very clean, very cheap, perfect location.

Krakow itself was also a pleasant surprise, even though we were only there for a couple of days. We cruised around and checked out the nightlife in the evening, 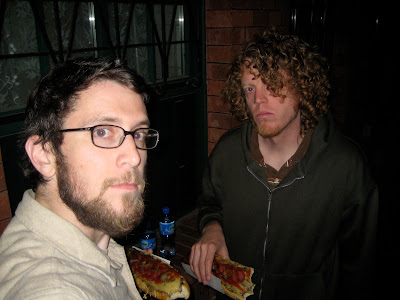 took in the historic tourist sites during the day. The first night we were out we were looking for a late-night bite to eat, and came upon a small building where there were multiple lines of people buying some sort of take-away food. We thought it would be a pretty good bet to get in the longest line to get some authentic Polish grub. It turns out what we were waiting in line for was Zapiekanka. It looked like a french bread pizza from far away, but upon biting into it was a totally different flavor experience, hard to describe even. It was like some sort of cooked squash or mushroom, covered with some cheese, then topped off with a little salami, some pickles, and some sort of sweet tabasco/ketchup-like sauce (but not really spicy) Little did we know this is a pretty famous snack at a pretty famous spot (found out the next day on a tour). So that was a win. The next day we went for another Polish classic: Pierogi. We ate at a place recommended to us that basically only served Pierogi, and we got a sample platter with out 12 different kinds.... Mmmmm.

We also decided it would be appropriate, since we came in the Trabi, to make a voyage out to the socialist realist city, Nowa Huta. This was one of the few cities actually planned and designed 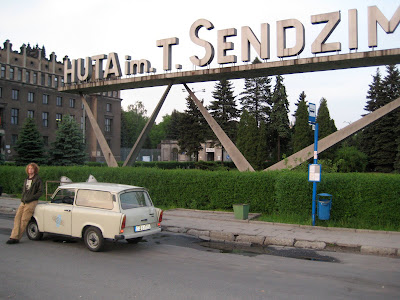 from the ground up to fit to the socialist ideal. They actually have a popular tour you can take of Nowa Huta in a real life Trabi for 40 euros. Here we are with our own Trabi in front of the Steel Works just outside the city. There was actually a funny moment in the hostel the next morning. We were talking with some other guests, mostly Polish and German, a bit about communist architeture and society. They seemed to think there were better ways to spend our time than visiting Nowa Huta, we thought it seemed interesting. We explained we were from Dresden, where you also see a lot of it. Like most people, they were bewildered that we came from Dresden in a Trabi. In talking about Dresden, Cliff starting relaying his feelings on how East Germans seem in general more friendly than in the West, more casual, more family oriented, and maybe this was from being brought up in a socialist state. The others sort of anxiously disagreed, kind of taken aback that at the suggestion that anything good could have resulted. And then Cliff starts talking about how nice Nowa Huta was, with the large green areas, and that it was well designed and may have been a nice place to live, from a physical standpoint. And I could see these guys thinking "Americans, come over to live in the former East Germany for some reason, buy a Trabant, drive the damn thing all the way to Nowa Huta, and are here telling us how great socialism is???" I wanted to then be like "so what do you guys know about the modern communist party? maybe you would like to take some of these flyers here....." cause that's where it seemed like it was going.

The way back much more more eventful than coming. For starters, we stopped on the way and took a long tour of Auschwitz, which was basically beyond words to describe. Sort of mind- and body-numbing. I think anybody should really go there, but you will be a zombie for a day in disbelief and reflection and just walking on the same grounds, the same train tracks, the same buildings......

One of the quirks of the Trabi is that there is no gas gauge. Basically you have a reserve 'tank', that you kick over to when you run out of gas, and 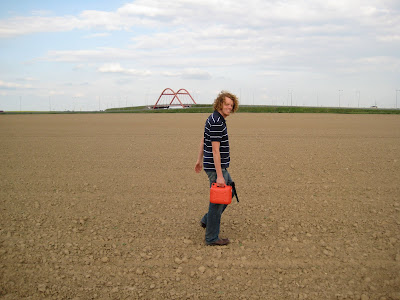 then go fill up. Once you hit the reserve, you have about 4-5 liters (just over a gallon) of gas left. Well, we were cruising our way back and hit the reserve, as we always do, and looked for the next gas station. And looked. and waited. and 30 miles later, still no sign. Finally we saw a sign for gas in a few kilometers, but knew it was gonna be a close one. Well, we didn't make it. We came to a stop in front of a sign signalling 1 km to gas. And so we had to walk to the station for gas.


And then to top off the adventure we kinda made a wrong turn coming back into Germany and added a couple extra hours onto our trip home. This also meant driving in the middle of the night, tired, and trying to navigate our way on country roads through little German towns. I guess it was inevitable that we were gonna get flashed. We managed to each pick up a ticket within about an hour, crusing through these little towns, where nobody is out, but they've changed the speed limit from 80 to 50 or whatever for half a kilometer and put a box there: 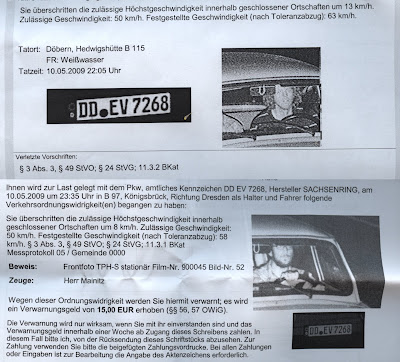